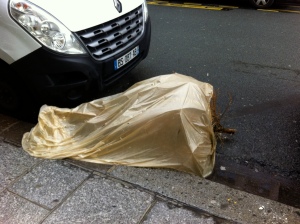 It is Sunday morning and the street outside is busy with all of its usual Sunday morning activity.  A long line of people are waiting quietly at the butcher shop.  There is an equally long line at the bakery.  The man with the hurdy-gurdy is on the corner playing his tunes.  He is only appears on Sunday.  Perhaps he has a job during the rest of the week.  He turns a crank and music tinkles out.  Sometimes his tunes are just instrumental and sometimes Edith Piaf is singing from his box.

The things which I am not writing about seem to make for a sizable list.  When I consider some of the unwritten topics, I wonder why exactly so many things are being left out.  It is not possible to include everything and, of course, this is one of those places which has been described and discovered and explained by everyone from everywhere.  It is not easy to take on some topics without turning into a Tour Guide.  I have included little or nothing about food even though that is a daily fixation.  Restaurants, markets, individual dishes, and even supermarkets are not being commented upon.  Bookshops, films, poetry readings, museums and exhibitions are largely absent, even while they demand my attention.

We visited an exhibition in a nearby gallery.  At home, a few hours later, we realized we had missed the film which was showing in the basement of the gallery, so we walked back to see it.  The film was a disappointment but had we not seen it, we would have felt later like the exhibition was incomplete.  To then describe the show, its work and the film and to name the artist would have been me embarking on the job of art critic.  It is hard to note that an exhibition has been attended without having an opinion upon it. For good or bad, it is difficult not to have an opinion. Having an opinion and stating it are different things.   The same goes for films and for restaurant meals and for ingredients brought home and prepared.   To make a list would be one way, but lists are unsatisfying except for the list-maker.

I am interested to report that it is the 26th of January, and there are still Christmas trees being left out on sidewalks and in assigned corners of large parks every day for collection by the refuse people.  In the supermarket there are still SACS DE SAPIN for sale.  These sacks are a fund raiser for some charity.  The sacks are putty-coloured.  The purpose of the sack is to put your Christmas tree inside so that you can carry it out of your apartment and out of your building without leaving a trail of needles. I do not know how large a tree can fit into one of these sacks, but I assume it is only suitable for smallish trees which is all you would want in an apartment anyway.     EVH

This entry was posted on January 26, 2014 by coraclepress.