Climbing through a hole in a postcard

Just to prove it can be done, Skye, the daughter of our friends Maddy and Matt cut up the postcard along the prescribed lines, and climbed through. I had put this new card into Jeremy Cooper’s postcard exhibition The Postcard is a Public Work of Art at X Marks The Bokship bookshop in Bethnal Green, London this January 2014, whose title was taken from an earlier card I had  produced, way back. It heralds a kind of polemic for postcards, as if you could have such a thing with so casual a form, if it were one.  Our past work is littered with postcards, without really ever taking them on board fully as a genre. They inadvertently just seem to occur.  I love their interaction with everyone who sees one, reads the message, props it up on the shelf. This one is a bit different in that it asks you to do something rather than just receive, if you want to, and thereby destroy it. I’ve run out of them here as I’ve sent so many, with its crunchy letterpress on thick board, printed by Darren in Tinkers Drove in Wisbech in the Fens of England. SC 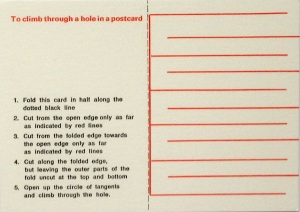 This entry was posted on January 27, 2014 by coraclepress.