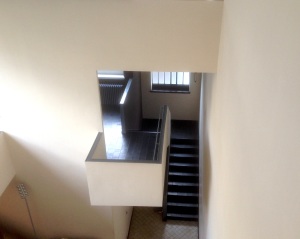 We are running out of Portes on the north and east sides of the city and there are loads to walk on the west and from the south.  The jumping back and forth from different beginnings was only chronological for the first five walks so why do I feel a bit guilty that we are jumping in and out of order?  Since we are the ones making the rules for these walks, we can certainly be the ones to break them or to change them.

Porte d’Auteuil (No.13) was planned specifically because we wanted to visit Le Corbusier’s Maison La Roche.  We had understood that the house was only open on Saturdays for a few hours.  On checking in the morning, we realize that we had the hours mixed up with somewhere else but since we had decided on the Saturday visit, we continued as planned.

Coming out of the metro station at each starting point is always a surprise. Climbing up the stairs always holds a moment of anticipation of the unknown. Sometimes we find ourselves in a poor or ethnic neighbourhood and sometimes we are in an unhappy industrial residential mix.  Some neighbourhoods are salubrious.  Auteuil was salubrious.  Wherever we start we try to locate the Periphérique before we begin to walk.  The tasteful streets and shops and generous architecture were pleasant to walk through. We saw a house with dense growth of bamboo between the glass of each window and the small railings around each window.  Looking out from any of the six windows on two floors one would see only bright green colour with light glowing through the green.  I think it would have been hard to see even as far as across the street through the dense bamboo leaves.

Maison La Roche was a delight as we knew it would be.  The deceptive lenses of modern cameras have made the spaces appear bigger than they are in reality. Or maybe it is the fame of the concept and the legacy of Le Corbusier which has made the spaces loom larger in our minds than they are in reality.  I was surprised at how coarse some of the finishing work was.  It was not done by fine craftsmen.  It was just done.

As we were leaving the house we bought a map which located other Le Corbusier buildings in the Ile de France and beyond.  We were delighted to have it as we realized that we could plan a few more viewings along a few more walks. Somewhere between Maison La Roche and rue de Bretagne,  I lost the map.  I had spent enough time looking at it to know some of the places,  but what a disappointment to find something so perfectly functional and to lose it before really having a chance to use it.

Late Sunday afternoon, we went out to Porte d’Ivry (No.14) which was a pretty grim edge of city neighbourhood, even in bright sunlight.  We sort of knew what to expect as we walked out of the Metro by the people who were walking out with us.  There is a lot of new high rise building going on and a lot of burned out buildings and deserted lonely streets.  We knew that Le Corbusier had designed the Cité de Refuge for the Salvation Army down there because I took note of that well before I lost the map.  We detoured to view it.  The large long building with coloured window shades originally housed 500-600 homeless people.  I do not know how many are there now. We were not able to go inside. I doubt the people who are housed there care much about the designer but I hope the living spaces provide them with a good sense of safety and of home. The whole thing was designed to have the feeling and space allocation of an ocean liner.  I do not think that is of much concern to the residents either.

We arrived home in the dusk. My knees and legs were tired after 8 kilometres of walking on hard pavements. 8 kilometres is not such a long distance so I do not know exactly why I felt so tired.  Maybe it is just the cumulative effect of so much city walking. Walking. Looking. Talking. Not talking. Traffic. Noise.     EVH

This entry was posted on February 3, 2014 by coraclepress.