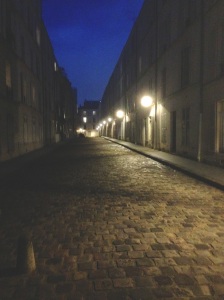 The Passage d’Enfer, off Boulevard Raspail near Montparnasse, is very famous, so much so that there is even a perfume named after it, but was unknown to me. Imagine coming across it on a cold wet night in February, looking for all the world like a film set, it is so archetypal. In this way, its bleakness is almost cosmetic, and far from the empty industrial streets of my early years in the midlands and north of England.It is the full vista of the late surrealist landscape, the true legacy of  de Chirico and Magritte,  and gazing at it through its locked gate at the entrance, I was reminded of a student film-maker I once talked to in Bradford, Yorkshire. He had saved boxes and crates of leaves one autumn and stored them in a warehouse until the next spring. One clear day, he filled the street with them, and filmed the workers leaving the front doors of their houses crunching their way in bright sunlight and blue skies in an empty city street. SC

This entry was posted on February 19, 2014 by coraclepress.