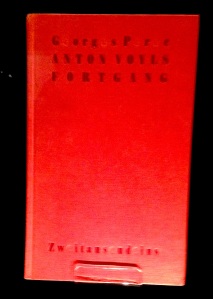 Visiting the display of Oulipo materials from the Bibliothéque Nationale at the Arsenal branch, almost on the last day,  amazed to see the cover of German translation of Le Disparition of Georges Perec ‘ Antons Voyals Fortgang’ translated by Eugen Helmlé from Frankfurt in 1986. What really caught me was the literalness of the blocking of the cover. Whilst the book was written without the presence of the letter e, here in this German version the e is left from the foil blocking of the cover. (I must use the device). It confirms my need for a different plasticity from that of the Oulipoians themselves, a literal one, a physically manifest one. That was my sense of the whole show : there may be moments when a wholly fresh visual sense feels like it is about to be confirmed, but it is so fugitive as to never quite make itself felt, and the entire exercise collapses into the very writerness of literature in France and French culture. I especially liked though the way an Oulipian is excused when he (mostly he’s), dies. SC

This entry was posted on February 18, 2015 by coraclepress.