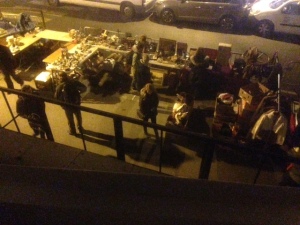 The police put a note on the front door.  It was about parking. Actually it was about not parking.  It was about not parking on the street on Thursday the 28th through Sunday the 31st.  It was about restricted parking even at night during those dates.  On Wednesday there were lines spray-painted on the curb of the footpath.  Each section between two lines had a number.  The sections were equal and each was maybe 3.5 metres.  I decided that the numbers and the sections were about some digging up to be done.  I wondered how digging and putting back together could be achieved in just four days. On Thursday large vans began to arrive.  Most of the vans were white.  A lot of furniture and stuff was unloaded. Tents were put up.  Some of the stuff was packed into tents and then the tents were closed up or they were tied up tight with rope. Through the night more vans and trucks appeared.  The vehicles were blocking the side streets. Some stuff got unloaded and was left covered by plastic sheets and some was left out in boxes and on tables. A lot was probably still inside the vans.  The vans and trucks stayed where they were all night. Instead of going very quiet late last night, the street remained active in a not normal way.  At 5.30 we woke up.  It was not because of noise. It was just the sense that something was different outside. Looking out we saw tables had been set up on both sides of the street. People were going from table to table in the dark.  People were carrying flashlights.  No one was using smart phone torches.  They were using flashlights and looking at the stuff which was out for sale.  Tables were uncovered. Tents were open. From two floors up we could look down on the tables but we could not see much of anything because individual flashlights did not illuminate much for us from up here. Neither did the street lights. As the day got lighter it was easier to see things.  It was the first time I had looked down at a flea market from above.  It all looked scruffy and disheveled.  Later, as we walked through at street level the objects for sale looked much more interesting. There was furniture and clothing and ironed tablecloths and huge numbers of small chairs for children in a vast variety of styles. There were table lamps and dishes and frames and signs and the entire contents of shops which must have been bought up and brought here to sell.  There was hospital equipment. The tables and displays and tents continue for blocks and blocks and around the side streets and everywhere.  This sale of brocante was planned for November but was cancelled after The Terrible Events of that month.  It is now being held to cheer up the month of January. Today is bitterly cold and there is a sharp wind.  I wonder how everything will be stored and covered over for tonight.  I wonder if tomorrow will bring an even bigger crowd.  I shall need to go out and wander through it all again.  There will no doubt be new things to see.  At the very least the things on display will be organized in a different way after a night under cover so they will look different.

This entry was posted on January 29, 2016 by ericavanhorn.