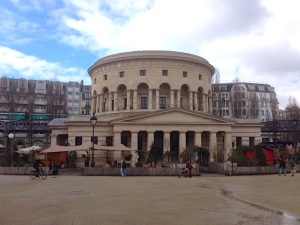 Claude Nicolas Ledoux’s Rotunda, finished in 1788 and now marooned between the overhead metro, the boulevard and high-rises at Paris Stalingrad, has been restored in recent years. It is a very elegant neo-classical building of utopic pretension. There is a curious two-thirds scale about it, and at the same time almost all exterior, with inside, a deeply internal squat column of a space, which is now a cafe. The circular column leads upwards to the flat lantern of light that illuminates it. From the piazza in front of it, there is that silence of newly-arrived architecture, only just implanted in its space, that you feel in paintings by de Chirico. SC

This entry was posted on March 7, 2016 by coraclepress.