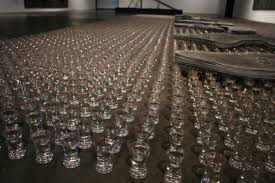 Stepping out, or more like hobbling-out for the first time with the torn ankle, to see the wonderful Alighiero Boetti exhibition I had seen in London last November. In there I heard that Jannis Kounellis, one of his working compatriots had just died. The work was not close at all, but they shared a time of radical change to raw materials that we have still never recovered from. Hearing of him in that context caused a reverie of one of his great works that I had seen in the early nineties in the middle of France in the most unlikely of venues.

It was in Chagny in Burgundy that Pietro Sparta made a gallery to show his Arte Povera friends and a few others, largely, if I remember, because of the  presence in Chagny of the truly great restaurant Lameloise. The artists wanted to eat there, and could be persuaded to come to the middle of nowhere and make a large exhibition. Here, passing through Chagny on the way south, Erica and I encountered the remarkable 1988 work of Kounellis, made of glasses of grappa and cut lead shapes. I understood there to be as many as 40,000 glasses of grappa, and the work was arranged in a far more fugitive state than the more formalistic museum presentation of future years. The smell was overwhelming, and you could hardly enter the rooms of the arrangement. Of course, the grappa evaporated and had to be topped-up continuously. An interesting aside to the Bill Culbert work Small Glass Pouring Light which is conserved by drinking, in its case the red wine of its subject.But here there was just far too much grappa to begin with that as a means of conservation, socially involving as both pieces might be. They are both great works and live in the memory.

Pietro Sparta had a partner in the gallery who was called Pascale Petite. There is a poet in Britain of the same name, and I have never known if she took another career. There was loose talk at the time of Pietro doing a show with Ian Hamilton Finlay, if I remember correctly. Not a bad idea I thought to myself, since their combined names made Little Sparta, the homestead of Mr Finlay!

This entry was posted on February 20, 2017 by coraclepress.