A Case for Books

At a nearby gallery in the fashionably dubbed Haut Marais*, our friend Didier Mathieu, from the Centre des Livres d’Artistes, has laid out a book exhibition entitled récits / écrits. It is a display of formative of work from formative women artists, largely American, from the heyday of the self-published democratic  book or printed format. But almost as a tangent to the content of the publications, is a clarity and assurance of the value of the display of printed forms. This is not often the case. I think that most of us working with such material feel very ambiguous and conflicted about putting books under glass, or on the wall in frames. They are meant to be held, turned, closed and re-opened, and an exhibition by its nature prevents this, except as a memory of such activation in the mind.

Didier Mathieu has always had a most concise idea about how book shows should be done, but this time it is exceptional, even to the point of hanging pages and centrefolds on the wall. They slightly articulate in the movement of air in the space, as Mallarmé’s newspaper reader in the garden is interrupted by a flying insect, and incorporates it into the narrative. 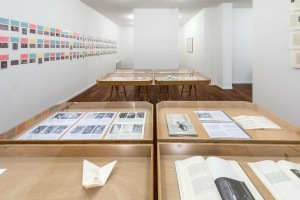 It is far from another exhibition visited recently,  L’Esprit du Bauhaus, at the Musée d’Art Décoratif, where the overcrowding, an often problematic thesis and history, should have been kept in a book and not placed in vitrines nor on plinths under glass domes. Nothing could have been further from l’esprit. By contrast Didier Mathieu’s display animated itself from within, and was firmly within the reductive clarity of that early modernist school.

This entry was posted on March 2, 2017 by coraclepress.