The Postcard is Always Innocent 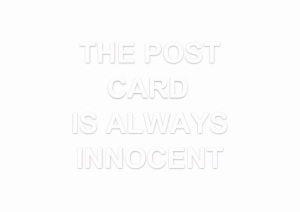 I have suggested a compromise: that I make a rubber stamp of my initials and stamp the back discretely in red near the number. This will take it a way from the fine-art print or limited edition object. I know that it is effectively limited, as all small press production is, in this case the 500 copies. But that is a hypothetical limitation, just a statement of practicality in the distribution and storage of such a dumb object.

For me these polemical postcards are really continuing statements of the nature of what could be almost its own medium. I am pleased that the British Library are using one of them as the title of the display of Jeremy Cooper’s collection in 2019 – The World Exists to be Put on a Postcard – and no prizes for guessing from whom that is an adaptation.

The catalogue note for the Ugly Duckling card gives this small genre a bit of history:

“THE POST CARD IS ALWAYS INNOCENT” continues Simon Cutts’s ongoing quasi-theoretical postcard project, manifestations of which have been released from time to time by David Bellingham in Glasgow in his WAX366 series. The project began with “NO FREE READING” in the mid nineties, and extends since then to “THE WORLD EXISTS TO BE PUT ON A POSTCARD” , “THE WORLD HAS BEEN EMPTY SINCE THE POSTCARD,” via “THE POSTCARD IS A PUBLIC WORK OF ART.” This serial project is one aspect of Cutts’s engagement with the tradition of Stéphane Mallarmé’s “Loisirs de la Poste.” He has written about the POLEMICAL POSTCARDS in Some Forms of Availability (Granary/RGAP)2007

This entry was posted on January 31, 2018 by coraclepress.