A Trio of Portes

We made the long walk in from the southern péripherique yesterday, linking three portes we had not done, numbers 31, 32 and 33 on our list of 39. I suppose it’s cheating a bit to put them together, but they are so close to each other, that the slight sweep to the west was perhaps justifield. These last portes straggle on a bit, and I think we are down to the last five. We may take one in this evening on the way to the cinema, and these Notes have become much wider and varied than the initial project of walking to and from them.

But it is always the detail of the encounters of the route that spark those tangents. Like here, where we found perhaps the most dishevelled bookshop on the planet. In the absence of Un Regard Moderne* of yore, this one of Jean Piccolec must take all the prizes. It is situated on the corner of Rue Lancon and Rue Savarin way down at the bottom of the 13th arrondissement. 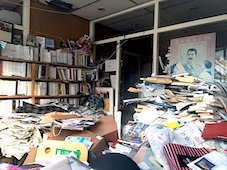 * I believe Jacques Noel’s tiny bookstore in the 6th arrondissement is still going, but from a recent web picture of it, it looks like it has been organised by someone else, and maybe its internal order has been supplanted.       SC

This entry was posted on February 19, 2018 by coraclepress.