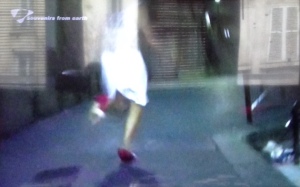 I caught up with Souvenirs from Earth is an international cable TV station, currently broadcasting in France and Germany, which I’d forgotten from previous years. It presents a 24h art program, of Video Art, Film, Visual Art, Music, Installations and Performances.

They say in their information spiel that the digital revolution, in TV broadcast has freed bandwidth for special interest programs and at the same time new flat screens and sophisticated projection technologies opened a field of new possibilities, and that the public space TV belongs to, is now ready for a station that is a work of art as a whole. Video art pioneer Nam June Paik said that in the 60s, already having the concept for an Art TV station in mind: “….normal TV bores you and makes you nervous, this soothes you….”…well that’s the theory at least! Like most video-art, and stuff that seemingly-innocently demands your attention, it becomes wallpaper. As old David Brown used to say art is always 99% crap!

But at least it’s money-where-your-mouth-is territory, and it streams out 24 hours a day if you have the patience for it.

What I do like is the closing sentence of the website : as Captain Kirk might have put it: “We collect glimpses of every day life, ‘souvenirs from earth’, to be used in a darker future by a couple of people that escaped our planet before it collapsed. This hypothesis may allow us to get a better view on the very simple things of our life, generating a global awareness for the grace and fragility of our life on planet Earth.” If that 1% works it’s truly worth it!    SC

This entry was posted on February 27, 2018 by coraclepress.